Active volcanic activity is a sign of Kamchatka being geologically young. There are 29 active, about 160 large and medium extinct and more than 1,000 small extinct volcanoes (slaggy cones, lava budges, explosion craters) in the peninsula. They are located in form of two belts of meridional direction in the eastern and south-eastern parts of the peninsula and included into the Pacific Ring of Fire. Most of active and extinct volcanoes concentrate along the eastern coast from Cape Lopatka to Shiveluch volcano.

The second belt is in Sredinny Range. Except Icha volcano, all volcanoes of this belt are extinct.

The volcanoes are connected with deep breaks of Earth crust. Several volcanoes are often timed to the same deep break. Usually they are located not far from one another and form groups. For example, Klyuchevskaya volcano group, located in the north-eastern part of the Central Kamchatka Lowland. Three active volcanoes – Klyuchevskoy Plosky Tolbachik and Bezymyanny – are included into this group. They are the most active volcanoes. 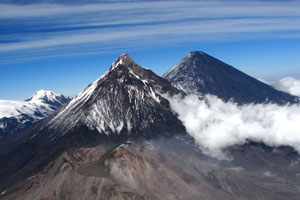 One of the world’s largest volcanoes - Klyuchevskoy (4,850 meters or 15,912 feet) - is the most grand and imperial one. It is a regular cone, located on the right bank of the Kamchatka river. Its slopes are covered with cracks and lava flows. And its top is ice capped. The main crater, located on its top, is 600 meters (1,969 feet) in diameter and 250 meters (820 feet) deep. However, eruptions often occur not through the main crater but through craters, located on its slopes. Heavy eruptions of Klyuchevskoy volcano happen approximately one time in 25 years, and moderate ones occur nearly every year. 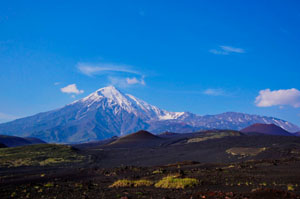 Two combined volcanoes – active Plosky Tolbachik (flat) and extinct Ostry Tolbachik (sharp) – arise in the south-western part of Klyuchevskoy plateau. Their neighborhood is so close that the sharp top of one volcano closely adjoins and commands the flat top of another one. Ostry Tolbachik (3,682 m or 12,080 ft) is cone-shaped and its sloped are covered with deep barrancos. Plosky Tolbachik (3,085 m or 10,121 ft) has a broad top engaged with not very deep caldera filled with glacier. There is an active carater in its western part.

Like all volcanoes of Klyuchevskaya group, both Tolbachiks are areas of modern glaciations. 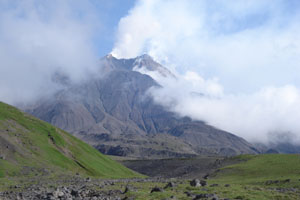 Bezymyanny volcano (2,882 m or 9,455 ft) is located in the central part of Klyuchevskaya group of volcanoes. Formed after the catastrophic eruption of the volcano in 1956, the lava cone continues growing in the crater.

Today, Bezymyanny volcano is one of the world’s active volcanoes. Seeming accessibility of the volcano (low heights - true altitude and relative ones – are about 1,200 m or 3,937 ft), constant reconstruction of the modern construction (since 1995 the volcano has been in constant eruption state), strong culminating events of eruptions and so on, make it rather attractive for many volcanologists of the world.

To the north of Avacha bay there is a group of volcanoes that includes active Avacha and Koryaksky volcanoes. Together with extinct Kozelsky volcano, they give some special beauty and exotic air to outskirts of Petropavlovsk-Kamchatsky. 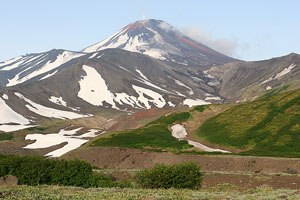 Used to be a bowl of 400 m (1,312 ft) in diameter and 200 m (656 ft) deep before being filled up in 1991, the crater of Avacha volcano had always had intensive fumarole activity. In result of eruption of 1991, the crater was sealed with “a lava plug”. Then, fumaroles concentrated mainly on the contact area of "the lava flow" and the edge of the volcano.

To the north-west of Avacha volcano, being separated from it by a saddle-shaped valley, there is Koryaksky volcano. Its regular cone is covered with barrancos with snow and ice fields on their bottom. Its height is 3,456 m (11,339 ft). It is the highest volcano in the southern part of Kamchatka. 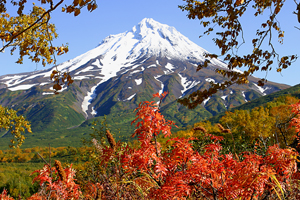 Vilyuchinsky volcano on the opposite bank of Avacha bay is clearly observed from Petropavlovsk-Kamchatsky.Its regular cone of 2,175 m (7,136 ft), covered with barrancos, rises above adjacent ranges for almost 1,500 m (5,000 ft). There is a small hollow of a destructed crater on the north slope near the top. The volcano was labeled as extinct one, although there are some data about vapor and gases liberation and mountain climbers frequently smelled sulfurous gases. Perhaps, “funerals” of this volcano were premature. 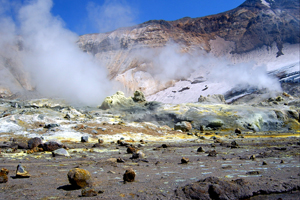 Mutnovsky volcano is located in 70 km (44 miles) to the south of Petropavlovsk-Kamchatsky. Together with Gorely, Vilyuchinsky, Asacha, this volcano forms a complex multiple-aged massif with Kamchatka and the world’s mightiest fumarole and mud fields and pulsating sources. Mutnovsky consists of four merged cones. One of them – Vostochny (eastern) – is the youngest, and its top is the highest point (2,323 m or 7,621 ft). There are two craters, partially overlapping one another, on the western slope. In 2000, an eruption occurred in one of them. In result, near the famous Active crater a new crater has formed with a blue lake on its bottom. One can observe vapor and gas jets edged with volcanic sulfur on the bottom and walls of the old crater. Sulfur cupolas with height up to 2.5 m (8.2 ft) and diameter up to 5 m (16 ft) can be seen above some of them. There are also water and mud pots here. Cutting the bottom and western walls of the northern crater, the Vulkannaya river forms a 80-meter (262-feet) waterfall in its outlet, and there is a deep canyon – Ovrag Opasny (Dangerous canyon) – is being formed below.

Mutnovsky volcano has a set of various volcanic phenomena. Visiting these places can be only compared with visiting the Valley of Geysers. 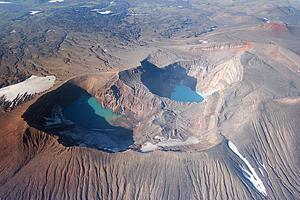 Gorely volcano (1,829 m or 6,000 ft) is located in 80 km (50 miles) straight to the south of Petropavlovsk-Kamchatsky. For its protruded cone, it is sometimes called Gorely Range (Burned). It is slightly lower than its neighbors – Mutnovsky and Vilyuchinsky volcanoes – and, perhaps, it is rather uninteresting in its outward appearance. Its peculiar interior beauty may be felt if you just take a look at the chain of craters, located on the top.

Gorely is a range-like massif elevating from the oval-shaped caldera. Some time ago it was a shield shaped volcano with a diameter of its foot of about 30 km. Its central part descended and thus formed a caldera of 9x14 km (5.6x8.7 miles). The craters overlapped on one another and the growing cones joined. In result, the modern protruded massif has been formed.

The remains of the old volcano surround the caldera with a low range. The caldera bottom in its northern and southern parts is flat and covered with sand, slag and lava fragments.

Each crater on the volcano top has its own peculiarities and together they form inimitable ensemble.

The most interesting of them are the following:

Aktivny (active) crater. It is the main activity site of the present time. It has a regular crater of about 250 m (820 ft) in diameter and is 200 m (656 ft) deep. An acid lake is located in the active crater with fumaroles (outlets of sulfurous gases) on its walls and bottom.

There is a flat slag covered ground 150 m (500 ft) wide, near the southern slope. In its eastern part a shallow crater of explosive origin located in its eastern part. It has a regular cylindrical shape and thus called Tsilindr (Cylinder).

Chasha Crater (Bowl) engages a top of a low and a highly regular cone and surrounded by a narrow ring-like crest. The crater is about 200 m (656 ft) in diameter. Its interior walls are rather abrupt. Earlier, there was a shallow lake with water of violet tint on the bottom. Now the bottom is filled with a mixture of slag, ice, and snow. 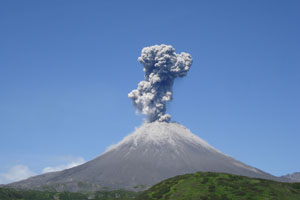 Karymsky volcano (1,468 m or 4,816 ft) is one of Kamchatka’s most active volcanoes. It is located in the central part of the Eastern volcanic belt of Kamchatka.

Karymsky volcano has a complex structure and consists of an ancient caldera and a young cone, located in its center. Caldera is 5 km (3 miles) in diameter. The cone is crowned by the central crater. Before 1996 eruption the true latitude of the young cone (Karymsky volcano proper) had been 1,546 m (5,072 ft) and relative one 700 m (2,296 ft). The central crater used to be oval in plan before the eruption. At the present time, it is a typical stratovolcano of central type, composed of lava flows with pyroclastic layers.

Eruptions of Karymsky are accompanied with explosions, ejections of ashes, and bombs from the central crater. Karymsky’s lavas are so viscous that fire flows rarely reach the foot of the volcano.

Karymskoye lake is located at the foot of the southern side of Karymsky volcano. It engages the central part of caldera of more ancient volcano – Akademii Nauk. Lake is 4 km (2.5 miles) in diameter. The true latitude of the water surface above the sea level is 630 m (2,067 ft). Its maximum depth is 70 m (230 ft). Any historical eruptions occurred in Akademii Nauk caldera are unknown.

A while ago (in 1996) an eruption occurred simultaneously in two explosive centers, located in the distance of 6 km from each other such as top crater of Karymsky volcano and caldera lake of Akademii Nauk volcano. The lake was literally boiling; its temperature steeply increased and contents of salts and acids rapidly achieved such a concentration that all life in the lake died, including a school of kokanee or lake red salmon specially settled in Karymsky lake by ichthyologists. In result of this eruption, Karymsky lake, which used to be an ultrafresh water body, has turned into the world’s biggest natural reservoir of sour water.

Later all eruptive activity has concentrated in top crater of Karymsky volcano. 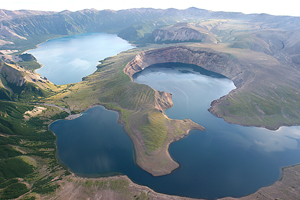 Ksudach volcano (1,080 m or 3,543 ft) is located on the south of Kamchatka and by its structure belongs to shield-shaped type. Its foot is about 35 km in diameter and slopes are gentle. All its upper part is engaged by vast oval caldera of 7x9 km (4.3x5.6 miles) formed by strongest eruptions resulting in a construction made of several calderas that overlap one another.

Uncommon even for Kamchatka wealthy of picturesque sights, from above a beautiful panorama opens: original caldera with abrupt rocky slopes sparkles with various colors of mountain rocks of dark, reddish, and light yellow tints.

Caldera's bottom has the two-level structure. It is divided to two almost equal parts such as western higher one, and eastern one, engaged with lakes. Small dark massif called Lavovy Kupol (Lava cupola), and the similar massif of light color nearby called Paryashchy Greben (Vaporing Crest) are located on the border between them, forming a barrier and bench at the same time

Two lakes - Klyuchevoye and Shtyubel - engage all eastern part of caldera. Klyuchevoye has a prolate form of 4x2 km (2.5x1.2 miles). It is surrounded by steep walls up to 500 meters (1,640 ft). The lake does not have any open outflow and water is filtered through a dam separating it from Shtyubel lake with length about 2 km. From this lake, cutting the caldera range, the Tyeplaya (Warm) river flows. In 1 km (0.6 mile) from the source it forms a 10 meter waterfall.

At the foot of Paryashchy Greben, tiny streams of Shtyubel hot springs seep on a narrow sand lakeside. Seeps of water up to 70°C (158°F) are found along the lakeside for 250 meters (820 ft).

Ksudach is one of Kamchatka's most exotic sites. It was announced a nature monument of landscape and geological character.