About two thirds of the Kamchatkan Krai are mountains. Two parallel ranges – Sredinny and Vostochny – are located in peninsula part. They divide the Western Kamchatka Lowland, the Central Kamchatka Lowland, and the Eastern Volcanic Upland. Eastern coast is partially engaged with isolated lowlands. Northern, continental, part of the Krai is the Koryak Upland, the Pezhina Lowland, and branches of the Kolymsky ridge.

In general, the Sredinny range is asymmetric. Its western sloping gently get down to the Western Kamchatka Lowland; its western slopes steeply fall to the Central

Kamchatka lowland. The range is composed of crystalline rocks that are hard enough to stand to weather and be destroyed. That is why the range is jaggy, sharp edged chains with ancient volcanic cones, calderas, etc. Here and there one can see remains of ancient glaciations. Lots of rivers and creeks flow from the range slopes fed by glaciers and glacier lakes.

The Eastern range is a system of several more or less separate ridges. It includes Ganalsky, Valaginsky, Kumroch, and Tumrok ridge. Bordering the Central Kamchatka Lowland from the east, they run to the north-east parallel to Sredinny
Range. All ranges feature significant heights which sometimes reach 2,000+ m (6,500+ ft). In areas with sedimentary rocks and tuffs, easily destroyed, height of mountains reduces and they obtain roundish outline. Solid crystalline rocks give the ranges sharp jagged forms.

All the ranges are also asymmetric, like Sredinny Range, however they have some steep slopes on the west, that bench to the Central Kamchatka Lowland. Eastern slopes are more gentle and go down to the coast of the Pacific Ocean in form of branches.

The Central Kamchatka lowland stretches to the north-east for 500 km (310 miles). Its width is changeable. In upper reaches of the Kamchatka river, on the extreme south, where the lowland is squeezed by ridges, its width is 2-4 km (1.5-2.5 miles). But to the north it quickly gets wider to 80-100 km (50-60 miles). In general, the lowland bends to the north; its covered with a thick layer of loose deposits of the Kamchatka river, in some places it turned into swamps very much. Numerous lakes, formed from former riverbeds and canals, are located along the river. The lowland gently gets to the ranges that border it.

The Western Kamchatka Lowland stretches as a broad zone (up to 70 km or 45 miles in its mid) along the coast of the Okhotsk Sea, from the mouth of the Ozernaya river on the south to the Palana river on the north. It gently goes up from the coast to the foot of the Sredinny Range. Its southern part is rather low and hilly and is rather high to the north.

The lowland coastal part is engaged with marine terraces. Behind the sloping belt of sand-and-pebble beach there is a storm roller with 100-200 m (350-650 ft) width and 3-5 m (10-15 ft) high. Having reached the coast and ran to the storm roller, rivers change their direction sharply and flow along it for several km (miles) and then bursting through it fall into sea. In general the lowland looks rather monotonous. Vast flat surfaces of sea terraces, covered with dense moss swamps take turns with low (20-30 m or 65-100 ft) flat watersheds occupied with small woods of stone birch. To the north of the Krutogorovaya river, low (300-500 m or 1,000-1,500 ft) ancient volcanic hills break this monotony. 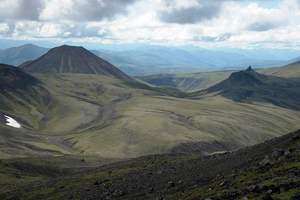 Low-lying areas of the eastern coast extend as a narrow belt and like the Western Kamchatka Lowland, they get down to sea with broad sea terraces. The surface of terraces is very swampy.

Most part of the eastern coast is occupied with branches of the Eastern Range, coastal elevations of the eastern volcanic upland and isolated mountain ranges. Their height is 1,000-1,500 m (3,500-5,000 ft). The mountains steeply fall into sea forming rocky but slightly indented shores.

The Eastern volcanic upland looks like a high valleys (up to 750 m or 2,500 ft high), divided to flat lava plateaus resembling posts, so called sheds or dales. Volcanoes tower above these plateaus. The tops of most of volcanoes are covered by everlasting snows feeding numerous rivers like Avacha, Zhupanova, Tolbachik and others.

The surface of the volcanic plateaus is waterless and resemble stone desert. Low, valley areas with shallow lakes and river channels spread between the dales.

The east of Kamchatka Krai mainland part is occupied with the Koryak Upland, and the west with the Penzhina Lowland, Prapol Dol and a group of ranges with Ichigemsky range among them.

The Koryak Upland consists of the central massif and ranges which go from it. Being viewed in plan, the upland resembles a star. The ranges heights are 1,000-1,800 m (3,500-6,000 ft). In the borders of the Koryak upland one can meet remains of
ancient volcanoes, tracks of ancient glaciations. On the heights of 800-1,000 m (2,500-3,500 ft) in the limits of the upland there are small sized modern glaciers. Tops of Ichegemsky and some other ranges of western part reach 1,500-2,000 m (5,000-6,500 ft). Many ranges have sharp comblike forms that are greatly divided by deeply cut river valleys.

The Penzhina Lowland embraces the lower reaches of the Penzhina river and its tributaries. Within its boarders, the high hills and numerous lakes are scattered on its  swampy valley surface.