Kamchatka is one of the less populated regions in Russia. Average density of population is very low – 16 sq km (6 sq m) of the territory for a person. Taking to account that urban people are 85%, thus, actual density is even lower.

One can meet representatives of 176 nationalities, peoples and ethnic groups on the peninsula. Most of the populations are Russians, then Ukrainians, Byelorussians, Tatars, Mordvins, smaller indigenous peoples of the North and other nationalities. Indigenous population is presented by Koryaks, Itelmens, Evens, Aleuts, and Chukchi.

There are about 342,000 people in Kamchatka in total, most of them live in Petropavlovsk-Kamchatsky. Valleys of the Avacha and Kamchatka rivers are populated most of all. The rest of the population lives mainly on the coasts because these regions have favorable conditions and also because Kamchatka’s economy is based on fishing. 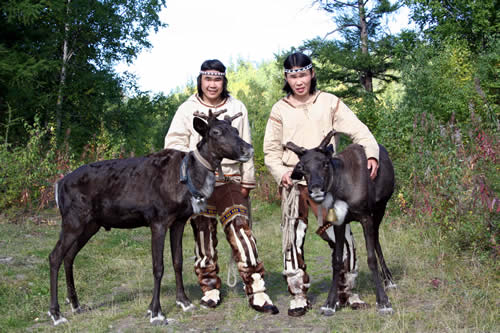 The oldest residents of Kamchatka are Itelmens. Their name means "those who live here”.

Cape Lopatlka is the original southern boarder of settlement; the Tigil river – the northern; and the Uka river on the eastern coast. Ancient Intelmen settlements were located along such rivers as the Kamchatka (Uykoal), Elovka (Kooch’), Bolshaya, Bystraya, Avacha, and along the shores of Avacha bay. A toion headed a tiny stockaded town, formed of several half dugouts, each occupied by members of one family community. Toions names are still on the map of Kamchatka such as Nachiki, Avacha, Nalychevo, Pinachevo.

In the end of XVII and early XVIII centuries When Russian pioneers got into the central part of Kamchatka, Itelmens were experiencing the stage of collapse of their primitive communal relations.

In the past, the Itelmens lived near water and on water in summer time. They moved up and down the rivers by means of dugout boats which resembled troughs and were made of poplar. They fished, using nets weaved of stinging nettle fibers. They also constructed traps on rivers to catch fish. Part of fish was dried as yukola (dried fish), part was fermented in special pits. It was impossible to store huge amounts of fish because they had no salt.

Equal occupation of this people was hunting for fox, sable, bear, snow sheep. On the coasts they hunted sea animals such as sea lions, seals, and sea otters. Itelmens ate lots of fish, preferring baked (chuprik) fish and fish cakes (tel’no); they ate fresh sprouts of shelomainic, meadow saxifrage (beakchervil) and cow parsnip or puchka (before it obtained burning feature); as antiscorbutic means they used Dwarf Siberian pine cones together with dried salmon caviar, taking it with tea; they flavored food with seal fat which is the best seasoning of all Northern peoples.

Itelmens’ clothes were also unique, made of sables, foxes, ground squirrels, snow sheep, dog skins with abundance of tassels made of ermine and fur trimming at collar, hood, skirt, and sleeves. Steller wrote: “The most spruce kuhlyankas (deerskin shirts) are edged at collars and sleeves, and also on skirts, with dog hair, and hundreds of tassels made of seal hair and colored red hang on caftans (man's long outer garment) and dangle at every move.” Itelmens’ garments like that created impression of fluffiness and bushiness.

Koryaks are main population of the Kamchatka’s north. They have their own autonomy – the Koryak District. As Krasheninnikov and Steller considered, the people’s name originated from khora or reindeer. The Koryaks do not call themselves this way. The coastal residents were called nymylans or residents of settled villages. From time immemorial, nomads, who pastured reindeer in tundra, called themselves chavchuvens, i.e. reindeer people.

Reindeer herding was basic and maybe only business for chavchuvens. Reindeer gave them all they needed for living such as meat for food, skins for making clothes like kuhlyankas, malakhais (fur caps with large ear-flaps), torbaza (fur boots), constructing portable dwellings (yarangas or skin tents); their bones were used for making tools and domestic items; their grease for lighting of dwellings. Koryaks also used reindeer as transportation means.

Nymylans’ basic economy was fishing and hunting. They fished mainly in rivers, by nets made of stinging nettle fibers (one net was made during about two years and it was used only one year.) Sea hunting followed fishing in settled Koryaks’ economy. They used boats made of skins to hunt in the sea. They threw a harpoon, tied to the boat bow, to phoca and sea hare, and finished whales off with stone head lances. Sea animal skins were used to make boats, cover skies, sew footwear, sacks and bags, produce belts.

In a row of Kamchatkan aborigines the Evens are in some distance from the rest. By their origin and culture they similar to the Evenk (Tungus). Having moved to Kamchatka in XVII century, their forefathers changed hunting, their traditional business, to reindeer breeding.

When Russians came to Kamchatka, they called Evens, who were nomads in the Okhotsk coast, as lamuts or those who live near sea, and herdsmen as oroches, i.e. reindeer people. Beside reindeer breeding and hunting, the coastal Evens fished and hunted for sea animals. Blacksmithing was the most popular trade for Evens. Kamchatkan Evens’ dwelling was a cylindrical and conic chum (skin tent), resembling Koryak yaranga by its structure. In winter time they attached a tunnel like entrance to the dwelling to save warmth. Unlike other peoples of Kamchatka, dog sledding was not very popular among Evens.

Chukchi or reindeer people (chauchu), were northern neighbors of Koryaks, part of them moved to Kamchatka.

An owner of less than one hundred reindeer was considered a poor man and usually he was not able to have independent economy.

Bow and arrows, spear and harpoon were Chukchi’s main hunting things. Arrowheads, spearhead and heads of harpoons were made of bone and stone. Hunting for small waterfowl and game, Chukchi used bola (facilities for catching birds in the air) and a sling which was also a military arms together with a bow and spear.

Their main transportation means were reindeer, but like Koryaks and Itelmens they also used dog sleds.

Chukchi are perfect seafarers, skillfully managing boats with 20-30 people on board. With favorable wind Chukchi like Koryaks-Nymylans, used square sails made of deerskin (rovduga) and they fixed whole seal skins filled with air to the boards to get more stability in the waves. Almost every summer Chukchi performed hunting expeditions on boats from Krest Gulf to the Anadyr river. It is known that they traded with Eskimos going to the American coast in small fleets.

Aleuts are ancient population of the Aleutians and theiroriginal name is unangan i.e. off-shore residents.

By 1825, first 17 families of industrialists-Aleuts were moved from the Aleutians to be domiciled in Bering island by the Russian American Company developing Russian America.

Dog sledding was usual method of transportation on Bering Island. Aleuts used short and broad skies to walk in winter in mountains on Medny Island.

Dwellings of Aleuts on the Commander Islands were half underground yurts. Their domestic items included grass weaved bags, baskets, mats; they used seal bladders to store grease, yukola (dried fish), stock of black cow berry and grease and so on.
Homepage | About us | Kamchatka | Tours | Excursions | Info | Feedback | Gallery | Guestbook | Up