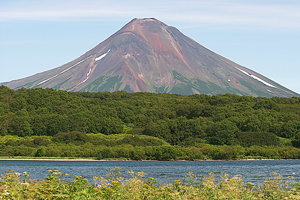 South Kamchatka State Sanctuary is an object of the UNESCO World Nature Heritage.

Having federal importance, South Kamchatka Sanctuary is one of Kamchatks’s largest wildlife preserve. It has an area of 225,000 ha of land and the three mile offshore zone.

It is located in the southern part of Kamchatka peninsula that features broken weather. The sanctuary is washed by Pacific Ocean in the east and by the Sea of Okhotsk in the west. Area of the sanctuary is unique due to its geographical location. Elements of Kamchatkan and the Kuril Islands natural complexes joint here together.

There is a well-developed river network, hot springs and many lakes in the sanctuary. They include the largest volcanic origin lake – Kurilskoye – Kamchatka’s second large fresh water lake.

The vegetation mostly consists of dwarf Siberian pines and alder shrubs. Tundras cover vast areas. In river valleys alder-willow forests grow together with large Kamchatkan grass. Light forests of stone birch grow in the basin of Kurilskoye lake and on the Pacific shores. Due to severe climate, the natural complex of Cape Lopatka (the southernmost end of Kamchatka peninsula) resemble subarctic tundra, despite it is located in midlatitudes. 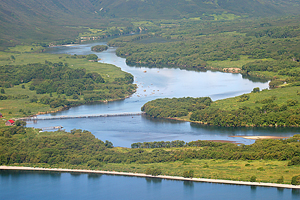 Flora of the sanctuary is diverse and counts 380 species of plants; some of them grow in the south of Kamchatka only. It is here where many Kamchatkan species of plants meet the barrier for their expansion, and some species, typical for the Kuril Islands, get here too.

All main typical Kamchatkan species of mammals (more than 40 species) are found in the sanctuary. They include sable, red fox, wolverine, wolf, otter, American mink, black-capped marmot, and snow sheep. Sometimes whales and dolphins can be met near the shores of the sanctuary. Fin-footed carnivores bed on rocky capes and islands including hundreds of sea lions. The most important protected species that caused creating of this sanctuary is a sea otter that form large aggregations now (2,000-2,500 individuals). Kamchatka’s largest population of brown bear lives in the sanctuary.

Actually all water bodies of the sanctuary are spawning grounds for Pacific salmon such as Chum, Coho, and Humpback. Kurilskoye lake is the Asia’s largest spawning ground for red salmon. Every year up to 6 million individuals enter it. But, this lake is not only the spawning ground and also it is a feeding water body. That is why spawning season for red salmon is unusually long as it lasts from March to July with boom in August-September. This is the reason for it being the most convenient model in Kamchatka for studying salmon spawning ecosystems. More than 100 brown bears gather at the lake to late summer. During mass passage of fish one can find up to 30 bears fishing within 2-3 km (1.2-1.9 miles)! They are confiding and it is very easy than somewhere else to watch them. 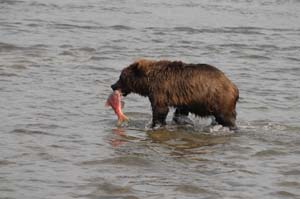 Fauna of birds include 176 species, with 104 nesting. It is 70% of avifauna of the whole peninsula. About 10 pair of Steller’s sea eagle and one of Kamchatka's largest populations of peregrine live within the borders of the sanctuary. And 50 communities of sea colony birds concentrate here with the largest one in Utashid Island. Autumn flow of migrants, especially sparrows over Cape Lopatka, beats all in Northern-Eastern Asia by its density and rate. But in winter we observe the most amazing and phenomenal occurrence in Kurilskoye Lake. Here in winter spawning grounds, great aggregations of birds of prey gather - up to 300-700 Steller's sea eagles, up to 100-150 sea eagles, up to 50 golden eagles and even bald eagles. Arctic falcon winter in the sanctuary. Thousands of anseriformes, gulls and auks gather along the sea shores. Winter ecosystem of Kuril Lake is unique. Actually all wintering bird in the sanctuary, including even small wood passerines, somehow or other feed themselves with red salmon or its roe.

With its unique Kuril lake, natural complex of Cape Lopatka, Kambalny and Kosheleva volcanoes, Utashud island, and Vestnik bay, South Kamchatka Sanctuary is one of the most wonderful nature corners of Kamchatka. It has outstanding scientific and educational importance and it is also extraordinary promising for development of ecotourism.
Homepage | About us | Kamchatka | Tours | Excursions | Info | Feedback | Gallery | Guestbook | Up