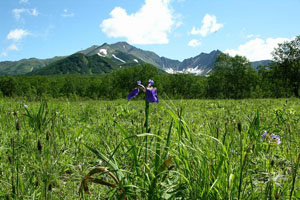 Kamchatkan woods do not resemble Siberian taiga or foliage forests of Russia’s European part. They form absolutely independent kind of vegetation in meadow and forest area with stone birch forests, most common here. Growing spaciously, stone birch forms pure open woods, so called "wood meadows”. At the shore or on the upper edge of the forest in mountains they are replaced by stone birch crooked forests of low trees with fancifully bent trunks and branches.

Coniferous forests, which covered most of Kamchatka’s territory in ancient geologic epochs, were almost destroyed during ice age and preserved mostly in the area of Central Kamchatka Lowland. As an additive to coniferous forests, there are aspen, silver birch, Siberian ash tree in this area. On the eastern coast, near the mouth of the Semyachik river, there is a small piece of dark coniferous forest formed by Sakhalin fir. 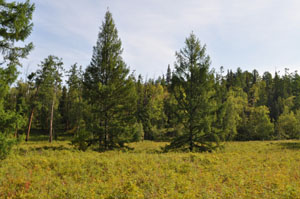 Flood plain forests have more diverse set of species of trees which include alder, poplar, chosenia (kind of willow), and several species of willow.

Dwarf Siberian pine and elder bushes predominate on mountain slopes in the subalpine belt, forming barely passable thickets. They are accompanied by more low bushes such as golden and Kamchatkan rhododendron, meadowsweet, and arctic willow.

One of the most Kamchatka specific plant association is thickets of large grass, reaching up to 3 meters (10 feet) height quite often. They are usually located along the river valleys, ravines, on slopes in places where groundwater is close. Most frequently found in them are Kamchatkan dropwort, cow parsnip, forest meadow saxifrage, groundsel and so on.

In general, Kamchatka’s vegetation cover has tree and bush plants prevailing, with 68% of all Krai territory. 25% are swamps, tundra, and meadows. 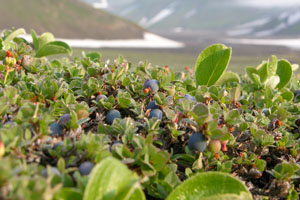 Mountain deserts and glaciers engage 7% of the territory.

species and subspecies of vascular plants. Last glaciations caused extinction of a number of heat-loving species, but they also enabled many arctic-alpine and even alpine species get into Kamchatka. There is a small endemic group of plants one can meet only in Kamchatka.

Due to relative rarity or because of destroying by humans, some of Kamchatkan plants were registered in the Red Book of RF such as ladies'-slipper, Kamchatkan orchid, rosewort, bluegrass and others.