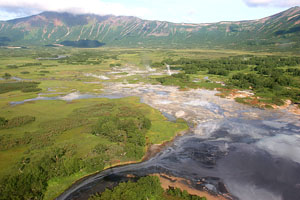 Kronotsky State Nature Biosphere reserve is one of Russia's largest. It is located on the eastern coast of Kamchatka and covers an area of more than 10,000 sq km (3,860 sq miles). In 1996 the reserve was included into the UNESCO World Cultural and Natural Heritage List.

12 of 29 active Kamchatkan volcanoes are situated in the reserve. A magic volcano called Uzon is something special.

A caldera of Uzon volcano is a huge volcanic bowl of 9x12 km (5.6x7.5 miles) and 150 sq km (58 sq miles) that has formed on the site of a destructed volcano. A special world of Uzon is in a stage of active hydrothermal activity. There live algae and bacteria for which poisonous boiling water is an habitation environment. With their motley colors they edge gryphons of hot springs and streams and create inimitable coloring for them. More than a thousand lakes and hot lakes and mud pots are concentrated in the caldera of Uzon volcano. 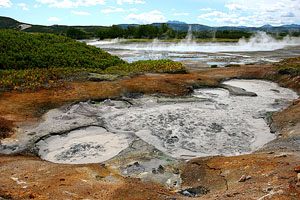 Other volcanoes – Kizimen, Komarova, Gamchan, Krasheninnikova, Kikhpinych, Central Semyachik – are interesting, beautiful and grand as well. Almost all active volcanoes of the reserve have destructed tops. Only Kronotsky is notable for its regular cone shining white.

There is a botanic nature monument – groves of gracious silver fir – in the reserve. This species of fir has got its name for its exceptional slenderness and beauty. This fir is the only in the whole globe. Silver fir grove has an area of 22 ha.

The reserve’s flora lists 749 species of vascular plants. As for vegetation, small-leaved light forests of Erman birch and dwarf Siberian pine prevail. Larch, fir, Chosenia and Komarov poplar are found too. Many species of plants are registered in the Red Book. 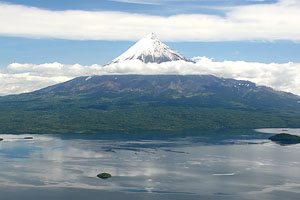 The preserve's fauna (52 species of mammals, 221 species of birds, 852 species of insects) is typical for Kamchatka peninsula. Arctic ground (long-tailed) squirrel, black-capped marmot, north mouse-hare, arctic lemming are also found here. There are a lot of rare animals here. Kamchatka’s largest population of wild reindeer (about 2,500 individuals); big population of snow sheep; Endemic subspecies of sable (this preserve was originally established for protection of this animal); otter, wolverine and others live here. Last century sea otters were destroyed. However, after creating the reserve they appeared on the shores again, and to the present time they achieved many hundreds in number. There is one of the Russian Far East’s largest and Kamchatka's biggest sea lion rookeries near Kozlov cape.

From 40 to 60 pairs of Steller’s sea eagles nest in the reserve. Some nests of golden eagle, Arctic falcon, falcon, peregrine are known. Seven colonies of Aleutian tern are located in sea side tundras. 69 colonies of 9 species of sea colony birds of 2,000 pairs in total are registered on the rocks of sea shores. Along Pacific coast of the reserve lays one of the most important migration routes of birds of passage. Semyachinsky coastal lake of lagoon origin, located near the southern board of the reserve, is included into a number of Russia’s most important wetlands and it is protected by the authoritative Ramsar Convention on Wetlands (a convention on wetlands of international importance as habitation sites of waterfowl). 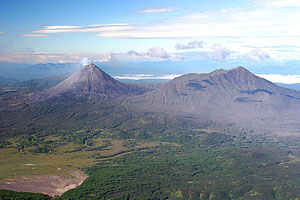 There are several objects important for science, education and esthetics in the preserve. Among them there are world famous Valley of Geysers, Uzon volcano caldera, the Valley of Death, the world’ only gracious silver fir, ecosystem of Kronotsky lake, Bolshoi Semyachik volcanic massif, and glaciers of Kronotsky peninsula.

The biggest sight of the preserve and all Kamchatka is the famous Valley of Gaysers. It is a ravine or rather a canyon with the Geyzernaya river flowing on its bottom. Large geysers are also known in Iceland, in US Yellowstone park, and New Zealand; smaller ones are in California, Japan and Tibet. But jetting springs in Kamchatkan Valley of Geysers beat them all by their beauty, grandness and number. 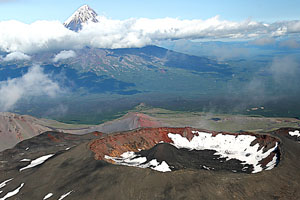 A person, who gets into the Valley of Geysers for the first time, is stupefied by fantastic nature of what he sees. The valley world is so unreal, that it seems that it happens in some unknown planet. Its colors are absolutely not typical for Earth’s landscapes – against bright green of dwarf Siberian pine and trees, there is brown, red, purple land of burned clay color. The air is extremely saturated with steam and sulfurous scents. Everything is boiling, hissing and bubbling everywhere here! By big and small pots, tiny volcanoes, soil and clay are boiling under your feet. Visitors must not get off the trail; they can scald themselves for sure. Steam arises from cracks and chaps on the ground; small nameless geysers and pulsating sources “shoot” with boiling water and steam. Each big geyser has its own name and its own activity regime. Fontan Geyser (fountain) is good being ejecting every 17 minutes and the head of geysers – Velican (giant) – makes spectators to wait for its "performance” up to 5 hours. Although, ones who get it at last will be shocked by mightiness of what they see: a column of boiling water and steam, like a giant mushroom, rises up to 20-30 meters (65-100 ft). Shchel (chap) and Gorizontalny (horizontal) geysers shoot jets of water and steam almost parallel to the ground surface. Geysers are not permanent, they can “diminish”, change their activity rhythm or turn to a regime of pulsating sources.

From a crater or gryphon of each geyser geyserite, a deposit of mineralized salts separated out of water shot by geyser, flows around like a frozen lava. Every geyser creates its own geyserite, different by form and color from others. Some are pastel pink, others smoky blue, third ones almost black… 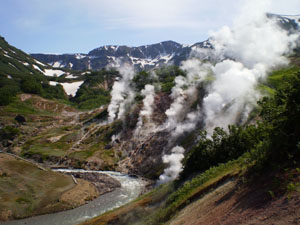 If you ascend the slope of the valley above the brown spots of fumarole fields, you can get into the kingdom of giant stone birches, with mighty branchy tops and queer twisting trunks.

On June 3rd , 2007, a natural catastrophe occurred in the Valley of Geysers – a mighty landslide. Some most beautiful places like waterfalls, baths, and geyser constructions were buried under the deposits.

The landslide has changed the air of the Valley of Geysers for minutes, but it has not lost its former magnificence. A new object for seeing has appeared – a mountain lake with turquoise blue water. It was named Geizernoye Lake.

In 2008 the Valley of Geysers became one of the winners of Seven Wonders of Russia competition.